Four Men And A Boat

On the Wednesday after Labor Day, I went sailing from Newport to Block Island with three other men, Pete Noonan, Ken Anderson and Steve Carney. Back in the early 60’s, we all went to school together at Moses Brown in Providence. With rare exceptions, we have not seen each other since the day we graduated.

Pete is the proud owner of a Swan 56, a magnificent blue water sailboat that he keeps in Newport harbor. He has raced it up and down both coasts for years, covering some 14,000 nautical miles in the process. This trip was to be the last hurrah for 2015 before the boat was hauled for the winter. 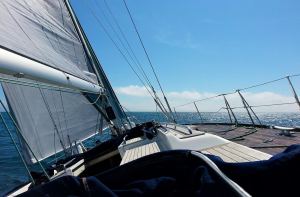 The day was spectacular — in the 80’s with a 15 knot breeze. Just enough puffy white clouds to syncopate the blue of a late summer sky. We set sail about 11 a.m. and headed south past Castle Hill into Rhode Island Sound.

What do people who haven’t seen each other in 50 years talk about? There were tales of families, careers, and grandchildren. (Steve Carney won the prize for biggest brood with 19 grandkids following in his wake.) To my surprise, we were immediately comfortable with each other, as if we had been together just last week and not a half century ago. Throughout that day and the next, there were snatches of conversations recalled, snippets of memories shared, and summaries of experiences accumulated since the last time we met.

Steve Carney spent three years in the Marine Corps. He was a lieutenant in charge of a reinforced combat company in Vietnam during the dark days of the Tet offensive in 1968. He told us proudly that he never lost one of the men under his command; that is an impressive feat. I can’t imagine a more significant achievement on anyone’s resume.

Over the years, he has sailed in the waters off Newport on board several vessels owned in partnership with others. Shared boat ownership sounds like such a smart thing to do but it is a difficult art. Everybody wants the boat on the 4th of July and Labor Day but few are interested in doing the maintenance all boats require before and after the season. The arrangement usually leads to friction. That Steve was able to make it work is further testament to his people skills.

Pete started selling real estate part time in a sleepy little California town called San Jose in the 70’s. Back then, they wrote songs about how hard it was to find the place; that was before the term “Silicon Valley” was invented. Once the tech boom started, land values exploded and Pete was there to help put the buyers together with the sellers. The Swan 56 is one of the fruits of his enterprise.

He is one of the oldest members of the St, Francis Yacht Club and races regularly on San Francisco Bay. He was a gracious host who let us all take turns at the rather enormous wheel of his boat, Defiance. It’s a long way from the sailing prams we started in back when Eisenhower was still in office.

Ken settled in Marblehead 30 years ago, one of the most active sailing communities on the East Coast and has nurtured his love of sailing there ever since. We raced together in Beetle cat boats on Narragansett Bay and at Bass River on Cape Cod. Back then, our parents would send us off on Friday afternoon to sail to East Greenwich, Bristol or Coles River for the weekend regatta. We always stopped at Rocky Point along the way to ride the rides and feast on the world’s best clam cakes.

It’s hard to imagine a group of twelve year olds today being allowed to set off alone to navigate their way to a distant anchorage. We often didn’t arrive until late at night or early the next morning, but there were always parents waiting patiently for us. There was something wholesome and untroubled about sailing back then. America has moved on into a less kind, less gentle era of fear and paranoia.

We spent the night in New Harbor on Block Island, eating pizza garnished with some cole slaw Pete found in a bag at the back of the refrigerator. We talked far into the night, connecting the dots that became the way points along the charts of our separate journeys. We spoke of former classmates and those associations sparked memories long since forgotten that we thought had been lost forever.

Today, all of us are on the cusp of 70. People our age understand that the end of our journey through time is just over the horizon. We feel the tug of the inevitable in a way we could not comprehend when last we were together. Unlike most people in our age cohort, we spent little time dwelling on our accumulation of infirmities and more discussing our hopes for the future. In fact, a groundswell of support has begun in favor of repeating this adventure again next year.

I have always been disinterested in the whole idea of reunions. So little that happened back then seems relevant to today. And so little of what has happened since seems relevant to events back then. The bond that connects us was broken when we all moved on to college and careers, wasn’t it? Perhaps I have been wrong all these years. There is a certain comfort in knowing others have confronted life’s mysteries and adversities and prevailed. Wisdom may be late in arriving, but its is seldom acquired in a vacuum.

In one sense, this trip was just a sail to a small island 12 miles offshore. But from another perspective, it offered insight into the irreversible flow of time. It taught me the value of staying connected to those who have made the journey with me, even though their boats were out of sight either ahead, behind, or over the horizon from my own.

Special thanks to Ken Anderson for being the official photographer of our recent adventure.

Totally enamored with my family, my grandkids, and seeing the world.
View all posts by Steve Hanley →
This entry was posted in Adventures and tagged Block Isand, reunions, sailing. Bookmark the permalink.