The Harbor At Monaco

Every two years, vintage racing cars come from around the world to race on the streets of Monaco. The race course at Monaco is hopelessly out of date by modern standards. It is too dangerous, too twisty and too narrow. There are only a few places where a driver can make a mistake without doing serious damage to the car. The likelihood of injury in the event of a crash is high. 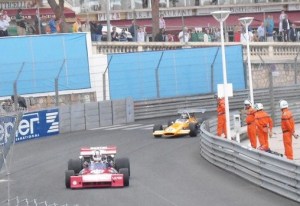 There has been motor racing in Monaco since 1929. All the greatest drivers – Chiron, Fangio, Moss, Hill, Clark and Senna – have pushed their race cars to the limit in the corners at La Rascasse, Ste-Devote and Massenet. All the greatest constructors – Bugatti, ERA, Alfa Romeo, Ferrari, McLaren and Lotus – have brought their cars here to challenge the streets of Monaco.

This is not just another race track. This is Monaco, the crown jewel of motor racing since the earliest days of the sport. Sitting in the grandstand overlooking the yachts in that famous harbor, you can hear the cars leaving the starting line behind you, streaming through Ste-Devote before streaking uphill to Massenet. There is electricity in the air, a sense of excitement builds as the cars hurtle through the tunnel and then downhill to the Nouvelle Chicane, put there years ago to prevent the cars from sliding straight off the track and into the harbor. Again. 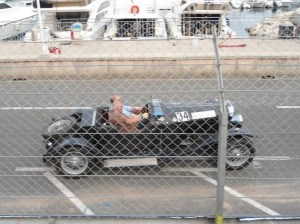 Soon, they swing into view, scrabbling for traction, the rear of the cars dancing and sliding through Tabac before sweeping past the yachts tethered along the inner harbor. The drivers tug and haul on giant steering wheels with their elbows outside the cockpit, struggling to impose their will on the cars as they dart by. Then in a flash, they are around the swimming pool and out of sight, the smell of burnt gasoline and alcohol trailing in their wake.

The Historic Grand Prix is organized into 7 classes. Serie A is for grand prix cars built before 1952. Serie B is for grand prix and Formula 2 cars before 1961. Serie C is made up of sports cars built before 1952.  Serie D is where rear engine grand prix cars from 1961 to 1965 are found. Serie E is comprised of Formula One cars from 1966 – 1972. Serie F  represents the heavy iron, Formula One cars from 1973 to 1978. And Serie G consists of 2 liter Formula 3 cars from before 1985. Friday is open practice for the cars. Saturday is devoted to qualifying and Sunday is race day. 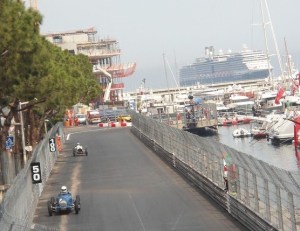 Most of the fans are here to see the old race cars, the ERA’s, Bugattis, Alfa Romeos and Maseratis that ran these same streets 60 to 70 years ago. Some delight the crowd with the sound of screaming superchargers. Others assault our ears with the thunder of large displacement engines. But all of them skitter around the track on narrow tires, slithering this way and that, always just on the edge of disaster.

The machines here this weekend are museum pieces worth up to a million dollars or more – in some cases, much more. In vintage racing, there is an unwritten rule that you do not collide with your competitors. Nor does anyone want to bend his collector’s item by stuffing it into a wall. But still, the level of racing is spirited, to say the least, at least near the front of the field.

There seem to be two kinds of drivers at Monaco for the Historics. The first group consists of racers who are bound and determined to be first across the line when the checkered flag waves. But many are simply content to be part of the scene. They drive with passion, yet you can almost hear them thinking, “I am driving at Monaco in an antique race car. How cool is that?”

One of those is Alan Patterson, driving an Allard J2X that he bought new in 1952 and has owned ever since. Alan is 82 years old this time around and promises to be back for the next event in 2014. In a 10 lap race, he completes only 7 circuits of the course. But he is here at Monaco in his flawless red Allard driving where the legends have driven. The sun is blazing in an azure Mediterranean sky on a picture postcard perfect day. Who wouldn’t wish to be Alan Patterson at this moment?

Part of the charm of Monaco is its mix of cultures. Nestled in the southeast corner of France only a few miles from the Italian border, it brings together race fans from many countries. Four announcers call the action in French, Italian, German and English. Yet whatever the language, the names of the drivers and constructors are the same: Carraciola and Dreyfus, Ickx and Andretti, Stewart and Senna. Ferrari and Maserati, Bugatti and ERA, McLaren and Lotus . The legend is everywhere around you, soaking into your soul like the afternoon fog that often envelopes the Inner Harbor.  Now you are part of the legend as well. Life will never be quite the same after you have been to Monaco.