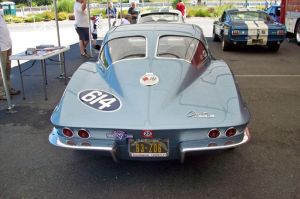 Lime Rock Park is one of America’s oldest racing circuits. Set in the Litchfield Hills area of northwestern Connecticut, it delights drivers with lots of elevation changes and twisty bits that challenge even the best drivers to find the quick way around.

Every year, Lime Rock hosts a weekend of historic racing, which draws vintage race cars from all over the US.

Two ex-racing drivers of note – John Fitch and Sam Posey – were on hand for the 2008 event and I got to meet both of them. Fitch was one of the founding fathers of Lime Rock and a visionary when it came to car design and racing safety. He passed away in November, 2011. He will be missed.

I took scads of pictures in the pits during the weekend. Check them out at this link: Lime Rock Park 2008.