Every once in a while, I get the urge go somewhere. Usually, this happens in the dead of winter when there’s two feet of snow outside my door and the Miata is sleeping under its car cover, waiting for Spring. That’s when the idea begins to germinate, the notion that there’s someplace I just have to go see.

It happened a few years ago because I read two books while lounging at the beach. One was called “A Year In Provence”, a witty and charming look at life in a rural province in southern France. The other was entitled “Under The Tuscan Sun”, which has since been made into a movie. It took a few years for me to find time to visit both places to happen, but in 2010 I finally did it. I spent almost three weeks traveling from Geneva down to Cannes, then over to Tuscany and back again.

In 2008, I headed off across the Pacific to spend three weeks visiting my son, Matthew, and his family in Sydney. Australia has an extensive network of railroads which feature fast and comfortable transportation. I studied the route maps carefully and planned a number of day trips. Each had two essential criteria. 1. The trip had to go to the end of the line somewhere. 2. The end of the line had to be near the ocean. 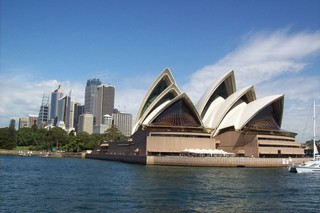 One of those trips took me to Cronulla, about 60 miles south of Sydney, a delightful seaside retirement community. Another landed me in the midst of an industrial area with factories all around, belching smoke into the sky! And a third – to the northern city of  Newcastle – turned out to be such a long ride that I had to turn around and head home before I got there. Australia is a really, really big place!

My journeys in search of car adventures have taken me to Historic weekends at Road Atlanta, Lime Rock and Watkins Glen and a Saturday morning at Cars N Coffee in Irvine, California. I have also done two High Performance Driving Education (HPDE) events, one at Lime Rock and one at Watkins Glen. It’s a hoot to be out on an actual race track driving just as fast as you dare without having to worry about little children or stray dogs crossing the road.

In May, 2012 I met my friend Alex, who lives near Geneva, and we drove together to

Monaco for the biennial Monaco Historic Races. Monaco is a very special place, steeped in history, charm…….and money. We saw cars from as long ago as 1921 racing on the streets of the city. It was a fabulous adventure. But to me, driving down and back through the Alps was the highlight of the trip. We didn’t take any highways. We crawled up and down some of the steepest, twistiest roads in the world, with sheer drop offs plunging down, down, down into the valleys below. Guard rails are an idea that has yet to come to many parts of Europe.

The Alps are breathtaking. It’s impossible for anyone who has never seen them to really imagine how magnificent they are. Think of them as a hundreds of Mt. Washingtons strung together and marching across the horizon as far as the eye can see.  Driving along, tiny villages arise out of nowhere, clinging to the sides of mountains for dear life. It’s easy to imagine that the Romans saw these same villages as they trooped into Gaul a thousand years ago. The photo at the top of these pages is one I took along the road. What magnificent scenery!

Remembrances of all these adventures and more are collected here and are accompanied by copious quantities of photos taken along the way. Hope you enjoy sharing my adventures with me. There aren’t any more grand adventures planned right now, but you never know. We’re heading into winter here in New England, which means plenty of time to think up new boondoggles.