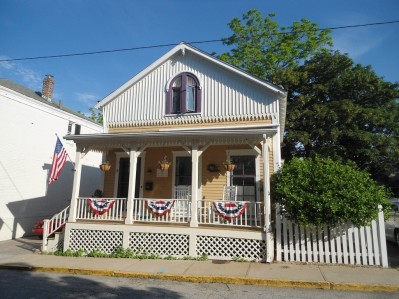 We spent last weekend in Newport on our first home exchange of 2013. Our exchange home was a delightful historic cottage just a few blocks from Broadway and a short walk from the waterfront.

Friday night found us in the hot tub, then watching the Red Sox game on TV. They lost, but somehow defeat is not as bitter when you are on vacation.

After a good night’s sleep, we walked to The Corner Cafe on Broadway for a sumptuous breakfast burrito. Then we dropped the top on the Miata and motored over to Second Beach in Middletown, where we spent the afternoon under a cloudless summer sky that poets and painters call “cerulean blue”. 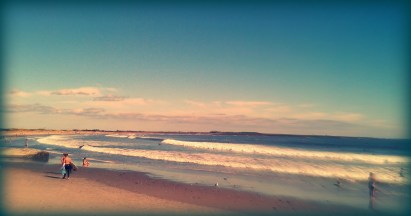 After dabbling our toes in the ocean (still a little cool for swimming at this time of year), we read books and worked on ridding our bodies of the deathly white skin bequeathed to us by too much time indoors over the course of a long winter.

And then serendipity beguiled us. Willie Nelson was in town! Who could resist seeing Willie in concert? We called the ticket office and secured the last two tickets for the event. After dinner at The Fifth Element, we strolled downtown to the Newport Yachting Center to hear him croon his way through his entire repertoire. We left just in time to get ahead of the crowd and hustled over to our favorite gelato emporium on Thames Street.

As we were licking our sugar cones on our way home, we heard a cry of delight erupt from one of the taverns along Thames Street. The Bruins had scored a goal to tie the score of Game Two in the Stanley Cup finals. We got home in time to watch the third period. The game ended in a tie, but then our beloved Bruins prevailed over the Black Hawks in overtime.  What a day!

On Sunday, we drifted back to The Corner Cafe for Portuguese sweet bread french toast coated with maple butter. Oh my. What a delicious way to start the day! Then we drove around 10 Mile Drive, ending up at Sail Newport at Fort Adams. Since we are members, we took one of their J 22’s out for a 3 hour sail on Narragansett Bay, before turning the Miata homeward once again.

The home exchange may be the best idea since paved roads. We have done about a dozen of them now and they have made for some memorable vacations. This one was only an hour away from home but we packed so much into a few short days, it seemed like we were gone for an entire week. Spending time in such a beautifully appointed home within walking distance of all the stores and shops in Newport made it memorable.

If you would like to view our photos of some of the historic homes we encountered as we walked around Newport, please follow this link.

Totally enamored with my family, my grandkids, and seeing the world.
View all posts by Steve Hanley →
This entry was posted in Adventures, Home Exchange, Road Trips and tagged Newport, Sail Newport, Second Beach, Willie Nelson. Bookmark the permalink.

3 Responses to Our Newport Escapade