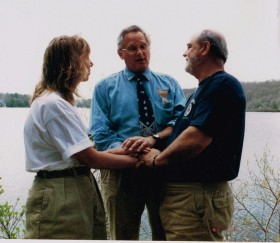 17 years ago, Carolyn and I went to Puerto Plata in the Dominican Republic. We planned to get married while we were there, but “The Judge” was always too busy to see us. I suspect that if we had come up with several hundred dollars, his schedule would have cleared immediately. Instead, we stood together in the warm Caribbean under a full moon at midnight and spoke our promises to each other. No magic words could have been more binding.

We considered ourselves married at this point, but when we got home to Chepachet, we made it official with a simple ceremony in our own backyard – just the two of us, a reverend who was a part time bartender, and two neighbors as witnesses. The dog and the cat watched from a distance. Here is a photo of the entire wedding party, gathered in and around the sleigh.

Over the years, we have exchanged a number of anniversary gifts, but lately we have taken to buying a tree or shrub for the yard so we can share our gift with each other all year long. Last Sunday we went out to breakfast and then to our favorite nursery to buy our plant for this year. But sadly, the nursery was closed.

We found another nursery that was open and stumbled upon this beautiful flowering almond, which now occupies a prominent position in our yard.

So, how did all this marriage stuff get started? Well, I came home one day after a snow storm almost 20 years ago and found this large snow bunny in the yard. I think it was the whiskers that did it for me. How could I not be smitten with a woman who had such artistic skills and a sense of humor?

It’s been 17 years together now, during which we have traveled the world and invited the world to visit with us at our bed & breakfast.  We have made new friends and lost old friends. And we have upgraded our rustic shanty on the lake into a comfortable country manse. Through it all, we have become the closest of friends. Not a day goes by when I don’t thank the Powers That Be for bringing Carolyn into my life. What she sees in me, I will never know. But I am awfully grateful to that snow bunny for bringing us together and making us soul mates.

Totally enamored with my family, my grandkids, and seeing the world.
View all posts by Steve Hanley →
This entry was posted in Adventures, Family Life, Travel and tagged bed & breakfast, Our Wedding. Bookmark the permalink.

2 Responses to The Anniversary Gift