EYC Rises From The Ashes

Last Sunday, I went to the foot of Shaw Avenue in Cranston to see the new Edgewood Yacht Club. The old clubhouse, built in 1908 by Murphy, Hindle & White, withstood the 1938 hurricane and Hurricane Carol in 1954. For more than a century, its iconic red shingle roof was visible from as far away as Conimicut Point — a beacon of safety and shelter for all who sailed the waters of Narragansett Bay.

The Edgewood Yacht Club burned to its pilings during the night on January 12, 2011. The news of its loss sent shock waves through the EYC community. The official explanation is that the old clubhouse was struck by lighting during a particularly fierce storm. But there are dark mutterings among the old guard about nefarious deeds and treachery.

We will never know the truth. All that was left when dawn broke that day were smoking embers. More than a century of memories had been consumed by the flames. Plans to rebuild the clubhouse began immediately, but it took 7 long years before people could walk once more through a building called the Edgewood Yacht Club.

EYC was hugely important to me and my friends when we were young. It is where we learned to sail under the watchful eye of Mackie Horton. Later we were taught how to race sailboats, beginning with the slow but immensely stable Beetles.

Two nights a week, the junior sailors descended on EYC, grabbed our foul weather gear from our lockers, and took the crash boat out to the moorings where our Beetles lay waiting — usually full of water. Pumping out the bilge, putting on the sail, adjusting all the lines just so. The routine never varied. If you wanted to go racing, you had to follow all the steps. There was a valuable life lesson in there somewhere.

On other nights, the Peppy Pappies and Wet Hens raced Beetles as well. And each evening, as the sun was sinking low, the Block Island ferry steamed majestically past on its way to its pier in Providence. 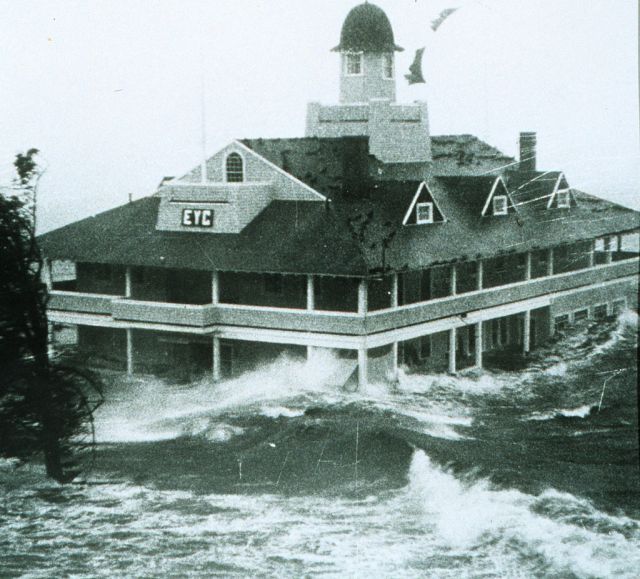 Edgewood Yacht Club at the height of Hurricane Carol, September, 1954

Sailing is an interesting way to spend time. When the wind is blowing hard, it can be exhilarating as the boat careens from wave crest to wave crest. Other times, it can involve little more than drifting aimlessly about, waiting for the next zephyr to fill the sails monetarily.

Sailing teaches you about the natural world. An old expression goes like this: “We cannot control the wind; all we can do is adjust our sails.” When you go sailing, you are at the mercy of Mother Nature. You will get there when you get there and not a moment before. It’s a valuable lesson, especially in a world when the pace of change seems to be getting faster all the time.

Eventually, my friends and I drifted apart, like boats caught in different currents. College, marriage, children, crisscrossing the nation or the world in search of employment — all conspired to separate us from the Edgewood Yacht Club community.

Today, the many classes of one design wooden boats that used to bob at their moorings in front of the Edgewood Yacht Club — S Boats, Thistles, Indians, Lightnings, Blue Jays, 11o’s, and Snipes — are gone. Only the Beetles remain.

Wells Pile at the helm of Pendragon.

To see a fleet of them racing once again is like watching a movie, a retrospective that takes the viewer back through time and space to a place long ago when the simple task of sailing a gaff rigged wooden bathtub half as wide as it was long seemed like the most important thing in the world.

The new building is an homage to its predecessor. (The first clubhouse was destroyed by fire in 1908 and rebuilt the very same year.) It faithfully reflects the shape and architectural features of the original, right down to that red shingle roof and the famous cupola. The new structure is smaller than the original and completely different inside. But it captures the spirit of its predecessor perfectly.

I rediscovered Edgewood Yacht Club last summer when I went there to collect my grandson after sailing lessons. In the spirit of “let the circle be unbroken,” he is now learning to sail in exactly the same place I first learned nearly 50 years ago. Sailing is like that. People who sail are connected to each other by the river of time that is the sea.

I found out that day that the Edgewood Sailing School runs night races for adults on Wednesdays. I started racing again and it was as if the years and decades just dropped away. The sound of the water rushing past the hull and burbling around the rudder is the same as I remember. A finger on the tiller still connects me to nature and its immutable forces — wind, tide, and waves.

Puffs, headers, laying the mark, port and starboard — everything is exactly as it was when Dwight Eisenhower was spending time at the summer White House and playing golf at the Newport Yacht Club. It all came back to me as if it were only yesterday that I was sailing my Beetle in the waters near the Edgewood Yacht Club. The only thing different is that the Block Island ferry is now a hydrofoil. And someone has somehow made Sabin Light disappear.

In the digital world, where progress is measured in microseconds and the internet is the new reality, there is something timeless about sailing. I watch the America’s Cup today, with its amazing catamarans that fly faster than the wind. As marvelous as those boats are, the basics of sailing remain constant. We cannot control the wind, we can only adjust our sails.

Thanks to the hard work and dedication of the members of Edgewood Yacht Club, future generations of sailors will learn the lessons only sailing can teach. And they will be better people and better citizens for having that knowledge. Welcome back, EYC. We really missed you.

Totally enamored with my family, my grandkids, and seeing the world.
View all posts by Steve Hanley →
This entry was posted in Saiing and tagged Edgewood Yacht Club, sailing. Bookmark the permalink.

8 Responses to EYC Rises From The Ashes