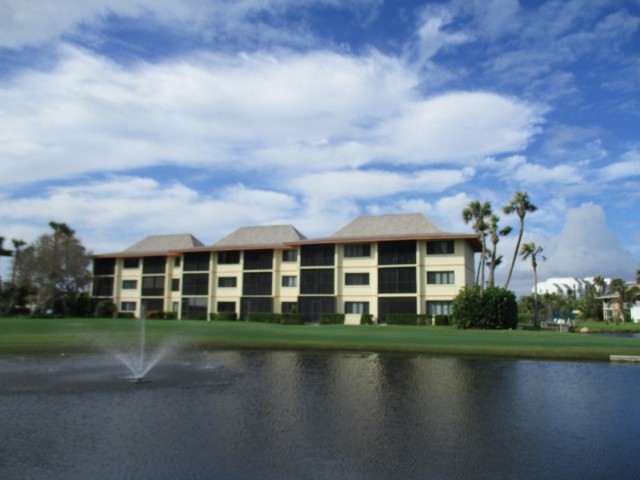 Our latest adventure captures the theme that has come to define our lives perfectly — go, see, do. You can find it in the words of Charles Kuralt located in the upper right corner of this page: “I see the road ahead is turning. I wonder what’s around the bend.”

The story began earlier this year when we got a home exchange request from some folks in Hobe Sound, a coastal community near Palm Beach. They wanted to come to Rhode Island in October for 10 days. We hadn’t planned on going to Florida in October, but I had a $500 voucher from United from last November when my flight home from San Antonio went awry. It expired in November, so we had to use it or lose it.

We said yes and started to make our plans. We booked our flight and reserved a car. Then Hurricane Irma happened. In its aftermath, the folks in Florida notified us they had to evacuate their home, which was damaged by the storm. Regretfully, they had to cancel the home exchange.

Which left us with a dilemma. It was easy enough to cancel our rental car reservation but what about the plane tickets? Could we cash them in? And what would happen to the voucher we used to purchase them? Even if United agreed to refund our money and reactivate the voucher (highly unlikely) we would still need to go somewhere within the next 6 weeks.

One option was to simply eat the plane tickets. Another was to find somewhere else to stay that wouldn’t cost us an arm and a leg. With 10 days to go, Carolyn found us a place in Ocean Village, a seaside community on South Hutchinson Island in Fort Pierce. The place looked pretty cool and the price was right — only $60 a night. We decided to go for it.

We were a little apprehensive because the unit we were renting sounded small — a one bedroom, one bath unit. We expected it to be like a typical motel unit. When we arrived, we were pleasantly surprised to find we would not be living in a broom closet during the next ten days.

The unit was cheery and bright with a well equipped kitchen, a generous living room and bedroom, lots of closet space, and a screened in porch overlooking the pool with a view of the ocean beyond. We felt we had gotten more than we bargained for.

After we settled in, we discovered we liked the village where we were staying.  There are some high rise towers and some low rise units like ours. The people at the pool were friendly. There was a par 3 golf course running through the property. We aren’t avid golfers but a par 3 is something we could see ourselves trying. There are about a dozen tennis courts, several bocce courts and shuffleboard areas, and bicycle paths everywhere. 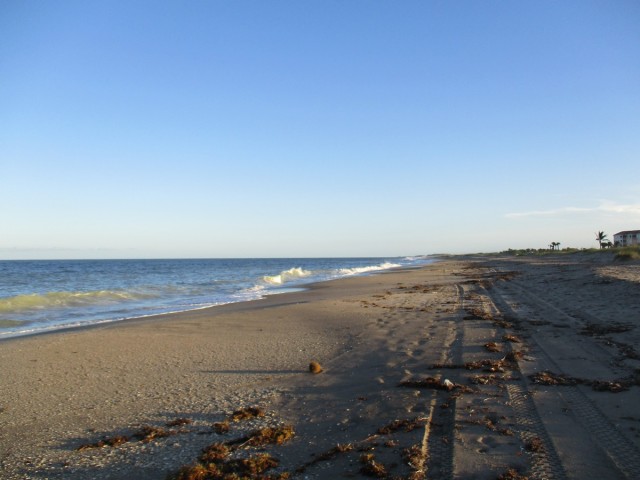 The beach was to die for. Unlike most of the Florida coast, there was not a forest of condo towers on either side of us. Constant surf. Gentle breezes. All of it just a 5 minute walk away. We were definitely impressed.

On a whim, we poked our head into the office to ask if any units like ours were for sale. They told us most of the 300 units in the village have a one month minimum for rentals but a few units in the low rise buildings allow one week stays. There were two units available — one in the building next to us and another in a building about 10 minutes away.

The units that can be rented on a weekly basis are highly desirable because they are in demand year round. Few people want to book a month in Florida in July and August, but locals from Orlando and surrounding areas are delighted to take a week at the beach to escape the heat of inland Florida. It’s sort of like folks from Pennsylvania flocking to the Jersey shore in the summer.

The unit next door was on the second floor and in move-in condition. The other was on the first floor and needed renovation. We asked to see both. An appointment was made for Monday. On Saturday, the broker called to ask if we could meet her at 9:30 am instead. There was some interest developing in the unit. Oh, sure. Some phantom buyer had magically appeared. We’re getting scammed, we thought.

We had already checked out both buildings and eliminated the unit on the first floor. A.) We don’t want to do any renovations at this stage in our life. B.) It was on the first floor and more susceptible to flooding in a storm. C.) It was much further away from the pool, the beach and the common areas. D.) It had a view of the parking lot, not the ocean. So it was the unit next door on the second floor or nothing. 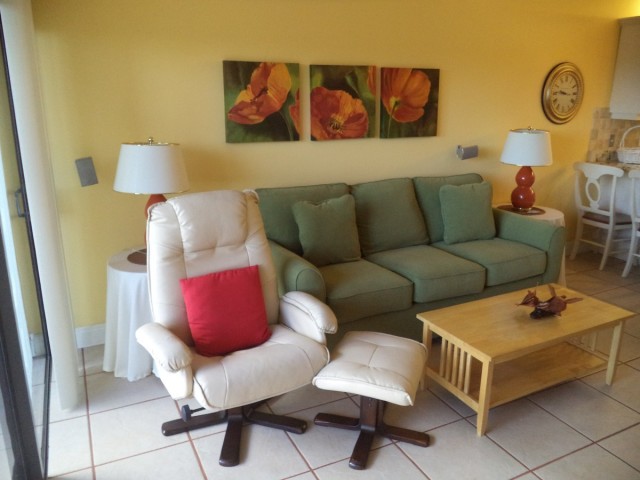 We met the broker and immediately fell in love with the place. It was painted in our colors. It had a better view than the unit we were staying in. And it had an updated eat-in kitchen area with nice granite counter tops. Plus, the owner had already rented it for portions of 2108 and 2019. The income would cover our costs for both years. We made an offer and went to the beach. The photo below shows our shadows on the sand as the sun is setting behind us. We could definitely learn to live like this. 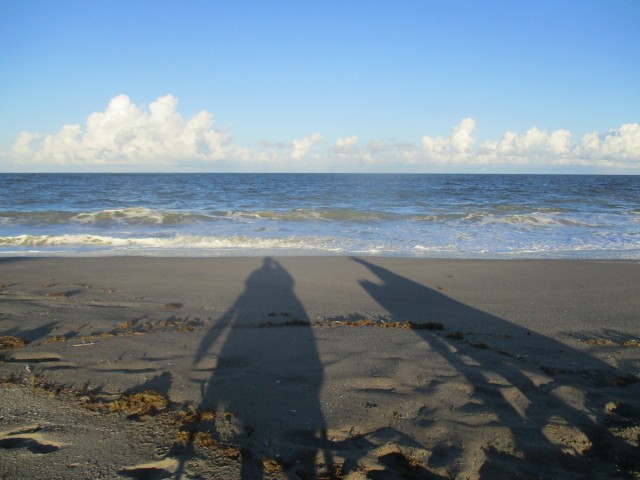 Part of our decision to make an offer was the city of Fort Pierce itself. Not as chi chi as Vero Beach to the north or Palm Beach to the south, it felt a little like Newburyport — a comfortable place where we could feel at home. There were also some great sailing opportunities, nice shops, an old fashioned theater, and a selection of interesting restaurants. 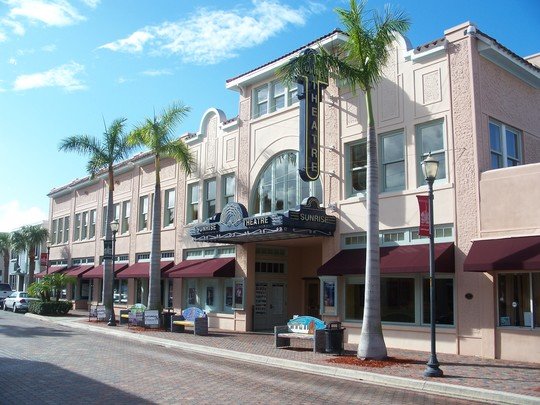 Fort Pierce is the sweet spot for us — not too impressed with itself but charming in an Old Florida kind of way. It is a quiet interlude between the hustle and bustle that Florida has become and feels like a throwback to a simpler time.

Come to find out, another broker was ten minutes behind us with customers in tow. They wanted the unit. On Sunday, two other brokers brought customers to see the place. One of them was actually banging on the door demanding to be let in. What put us over the top with the seller was that we were willing to close within 2 weeks. In this new modern age, everything could be handled online from home thanks to electronic signature and wire transfer technology. 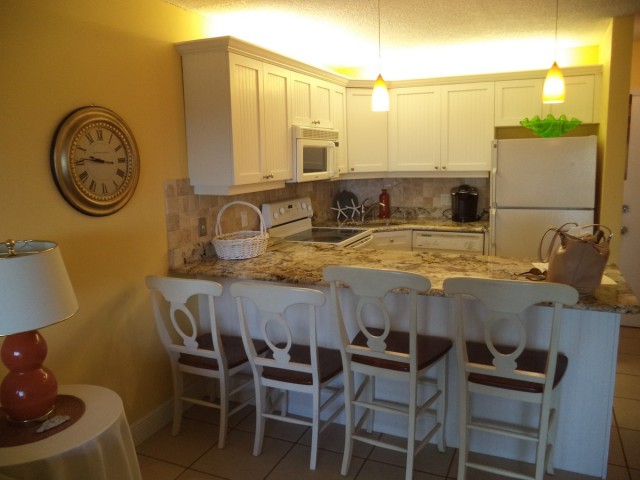 As of October 31, we are condo owners in Ocean Village on South Hutchinson Island, Florida. The unit will be rented most of the time but we will be able to stay for free whenever we want while enjoying a positive cash flow. Between home exchanges and condo rentals, we are now solidly part of the sharing economy.

Whenever a door opens, it can lead to all sorts of unexpected things. What doors will this decision to own property in Florida open for us? We don’t know. We have charted a course into unknown territory and are excited by the possibilities.

To paraphrase Robert Frost’s poem The Road Not Taken, two Floridas diverged on a sunny coast. We chose the one less traveled by and that will make all the difference. We invite you to share our newly discovered treasure with us. Perhaps you will like it as much as we do.

Totally enamored with my family, my grandkids, and seeing the world.
View all posts by Steve Hanley →
This entry was posted in Vacations and tagged Fort Pierce Florida, Ocean Village Fort Pierce, vacation rental. Bookmark the permalink.