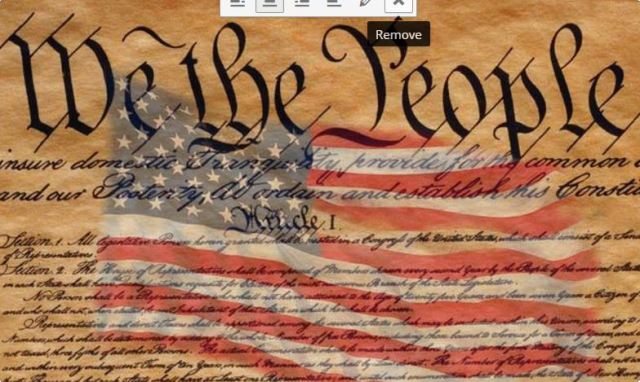 Most people don’t know that those who wrote the United States Constitution never expected it to last more than a decade or two. They thought it was more of a rough draft, a framework to get the new nation off on the right foot. They assumed the country would write a new one after it had acquired some experience with the original.

With that background, it makes those “originalists” who tie themselves up in intellectual knots trying to divine what the original authors meant by this word or that phrase look pretty stupid. The Constitution was not meant to be a “living, breathing” document, either. It was meant to be replaced and fairly quickly, too.

I think we have had ample time to figure out what is good and not so good about the current document. If you ask me, it is in desperate need of updating. Herewith, in no particular order, are some changes I would make if I were a benevolent dictator and had the power to rewrite the Constitution.

Every President spends the first 4 years in office running for re-election. This is a stupid waste of time that detracts from actual governing. I propose the President should serve one 7 year term. After that, he or she should go away and leave us alone. Give someone else a chance.

Citizens United is just plain wrong. If those with the most money get to run the government, all the laws will naturally favor the wealthy. That’s not the American way. Henceforth, all campaigns for federal office shall be publicly funded. Believe it or not, some people who are not fabulously wealthy have good ideas, too. Public funding will allow America to have the benefit of input from people from all stations of life. It will also significantly reduce the influence of campaign donors

Lobbying shall be a crime punishable by death.

All voting districts for federal elections shall be as close to square as possible, taking into account state borders. In appropriate cases, a rectangular voting district may be used, but in no event shall the ratio between its height and width exceed 3:2.

There shall be one system of health care for all Americans. Members of Congress and the Supreme Court plus all federal employees will get the same health services as employees of Walmart. The federal government shall be required to negotiate for the best possible price with pharmaceutical manufacturers.

All members of the Supreme Court shall serve for a maximum of 21 years and must retire on their 75th birthday. Congress shall be required to fill all vacant federal judicial vacancies within 60 days. If the Congress fails to do so, the President may appoint whoever he or she pleases.

A corporation is not a “person” within the meaning of the Constitution. As some have suggested, the only way a corporation can be a person is if Texas executes one.

Abolish the Bill of Rights. A lot of smart people argued against it when the first ten amendments were proposed. They said when you make a list, you automatically exclude anything not specifically included on the list. Experience has proven those people were right. Get rid of the damn thing.

Abolish the Electoral College. It was a compromise designed to make the smaller colonies fell their rights would not be trampled by the bigger colonies. It is an anachronism and it is highly undemocratic. Dump it.

Campaigns for federal office may not begin until 60 days before Election Day. We The People need a break from two year long campaigns that ultimately come down to who spends the most money.

Ban electronic voting. There is no way to protect against hacking or to accurately verify the results. The only power the citizens really have is the right to choose their leaders. Lots of people would like to interfere with that power for their own nefarious purposes. As Josef Stalin once said, “Those who vote decide nothing. Those who count the votes decide everything.” See Bush Vs. Gore for proof.

Ban winner take all elections. Replace them with an instant runoff election format. This has two advantages. First, it increases the chances that someone who is not  a professional politician might actually win an election once in a while. Second, the country gets the benefit of more candidates running for office, which helps to broaden the political dialog. That’s a good thing.

Term limits: 5 terms for the House; two terms for the Senate. America is not intended to have a ruling class of professional politicians. The country needs to encourage more people to participate in the political process and benefit from fresh ideas.

Repeal the Internal Revenue Code. Enact the Fair Tax. (no, it is NOT a flat tax!)

Okay. 14 seems like a good place to stop. I discussed some of these ideas with a friend while we were sailing together this summer. He said these sorts of changes could never happen. He’s partially right and partially wrong.

No, these sorts of changes cannot and will not happen overnight — perhaps not even within my lifetime. But recent events prove that attitudes change, albeit slowly, and things that seemed impossible once suddenly come to pass.

The conversation has to start somewhere, so let’s use these suggestions as a place to begin a discussion. Maybe our grandchildren will benefit from what begins here.

Feel free to offer any comments you deem appropriate and thanks for participating in the discussion. Always remember: If the people will lead, their leaders will follow!

Totally enamored with my family, my grandkids, and seeing the world.
View all posts by Steve Hanley →
This entry was posted in Politics and tagged constitutional amendments, democracy, US Constitution. Bookmark the permalink.