A Corn Maze And A Harvest Moon

Last Friday, I spent the afternoon with my granddaughter, Lillian, discovering the intricacies of a local corn maze. For those not fortunate enough to live near corn fields, a corn maze is a labyrinth cut into the corn stalks that remain after the growing season is over. It can be rather complex, as the layout is entirely dependent on how inventive the farmer cares to be.

At the beginning, each adventurer is issued an official corn maze pass and the objective is to find all four of the wooden posts hidden inside the maze. Each post has a paper punch tethered to it and each punch makes a different design on your pass. It’s easy to lose one’s bearings inside all that greenery, since the clever farmer has included lots of blind alleys and pathways that loop around endlessly. 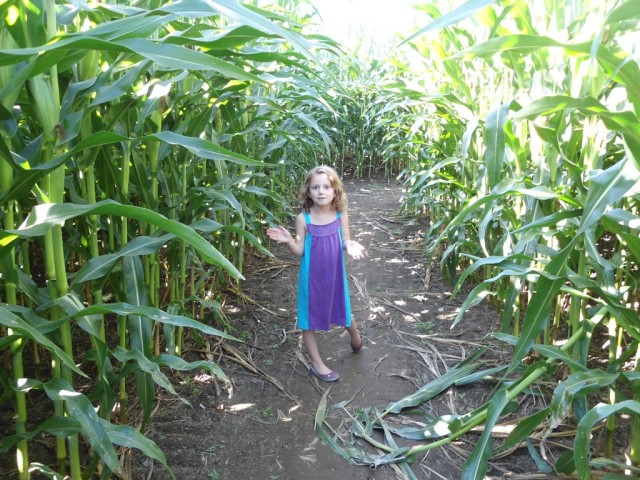 We spent almost an hour inside and found 3 of the 4 posts before Lillian’s interest began to wane. She is only 5, so finding an activity that keeps her engaged for that long is rather a triumph. At one point, we chanced upon a nice ripe apple lying on the ground amongst the corn stalks. “How did an apple get into a corn field?” she wanted to know. Good question!

Later that evening, after dinner was over and the dishes were done, Lillian, Carolyn and I sat out on the deck overlooking the lake and waited for the full moon to rise. In folklore, this would be known as a Harvest Moon, because it occurs near the autumnal equinox.  Like the corn maze, it symbolizes the end of the growing season.

Before it cleared the tree line, the moon looked like a powerful searchlight coming from behind the trees on the other side of the lake. Then it rose majestically into the starry sky, revealing all its surface features that make up the puzzle we call The Man In The Moon. Lillian was fascinated. As I was tucking her into bed later, she wanted to take one last look through the curtains at the moon outside her window.

The moon is visible to us because it reflects light from the sun back down to earth. But if it reflects light, does it not also reflect other forms of energy? Might it reflect psychic and spiritual energy as well?

When Lillian took that last look out the window, did she see only the reflected light of the sun or did she also, subconsciously, sense the love felt for her emanating from within our house? Would not that love also travel outward through space and be reflected back at her, now and in the future?

We modern people like to think we have all the answers and know everything there is to know. But maybe there are mysteries we still do not completely understand and questions we still cannot fully answer. At least, I’d like to think so.

Totally enamored with my family, my grandkids, and seeing the world.
View all posts by Steve Hanley →
This entry was posted in Adventures, Family Life and tagged corn maze, harvest moon. Bookmark the permalink.